In 2007, the Textile Group of Los Angeles donated a late 19th century Silver Studio textile panel to the FIDM Museum. About 7 feet long and 2 ½ feet wide, this printed cotton textile features a dynamic pattern of orange poppies and white daisy chains on a pink ground. As our curators were familiar with the Silver Studio, they were certain that the textile had been used to decorate an interior, not for garment construction. 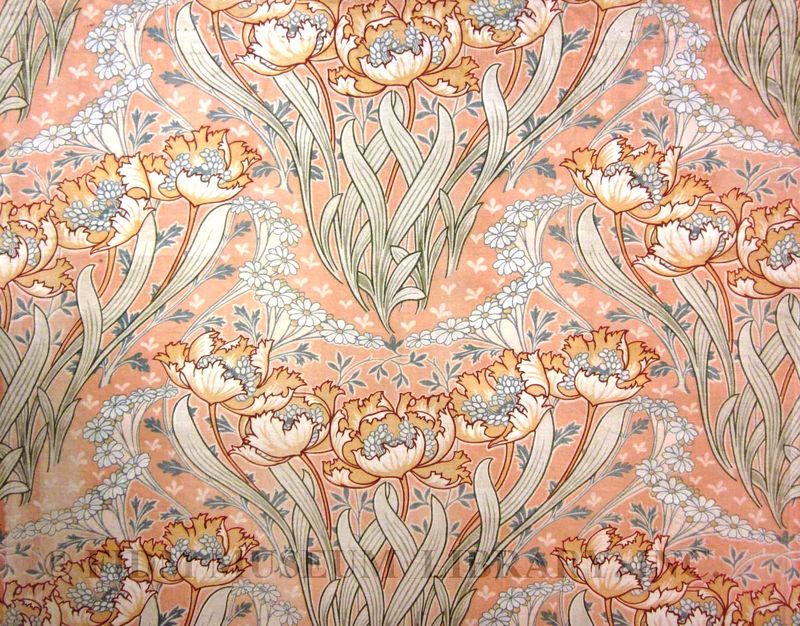 At the time this Silver Studio textile was donated to the FIDM Museum, we were developing an exhibition exploring design reactions to late 19th century industrialization. Though we hadn’t yet worked out all the details, we knew that the relationship between fashion and interior design would be a highlight of the exhibition. After many months of research and planning, Aesthetes, Bohemians & Craftsmen: Artistic Dress, 1880s–1920s opened in May 2008. Featuring fashion, textiles and furniture, this exhibition charted the course of the late 19th design rebellion protesting the ubiquity, uniformity and poor quality of mass-produced goods. Beginning with the Aesthetic Movement of the 1880s, the exhibition explored how artistic dress styles moved from the fringes to the center, becoming mainstream dress by the 1920s.

Throughout the exhibition, we paired garments with furniture and other decorative elements of the same period. The Silver Studio textile pictured here was grouped with an unusual c. 1905-10 embroidered silk gown, and a mahogany and leather side chair. The sinuous Silver Studio textile was included as a demonstration of how artistic design principles were adopted by large-scale manufacturers and retailers. Because interiors are altered less-frequently than clothing styles, a late 19th century interior textile could easily have been the backdrop for an early 20th century dress 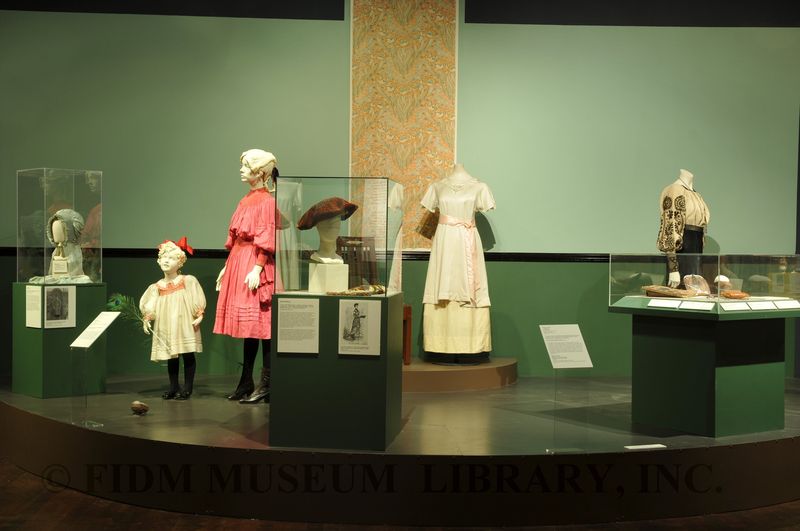 In conducting additional research on our Silver Studio textile for a blog post, I discovered that the company’s archives are now housed at the Museum of Domestic Design & Architecture (MoDA) in London. Imagine my delight when I realized that MoDA’s blog featured an image of the “our” Silver Studio textile pattern!

I suspected that MoDA would want to know about the existence of our Silver Studio textile, so I contacted MoDA’s Senior Curator Zoë Hendon. Zoë confirmed that our textile was indeed a Silver Studio creation dating from the late 19th century. She also gave us a more specific date for the pattern. In the next few paragraphs, MoDA curator Zoë Hendon tells us more about her institution, the Silver Studio and our poppy-patterned textile.

The majority of items in the Museum of Domestic Design & Architecture are part of the Silver Studio Collection. The Silver Studio was a design studio which operated between 1880 and the early 1960s, designing textiles and wallpapers for manufacturers and retailers around the world. These were mass-produced products, so you might think that many examples of the Silver Studio’s work would have survived. In fact, the reverse is true – Silver Studio designs doubtless graced the walls, curtains and furnishings of many millions of homes over the years, but they have rarely survived for posterity. They would have been worn out and replaced as home-owners redecorated. So the evidence for these designs exists in the Studio records, but rarely in the form of items that were used in real homes.

One exception is a great Art Nouveau curtain which we were able to purchase a few years ago with help from the V&A Purchase Grant Fund and the Art Fund. The design for this textile was created by the Silver Studio in 1896 and sold to Cumbrian manufacturer Stead McAlpin in 1897. This company printed fabrics on behalf of numerous retailers, including for example, Liberty of London. The pattern of highly stylised poppy sprays is typical of popular British Art Nouveau designs of the late nineteenth century. Though Silver Studio records aren't conclusive, the pattern was possibly designed by Harry Napper for the Silver Studio. 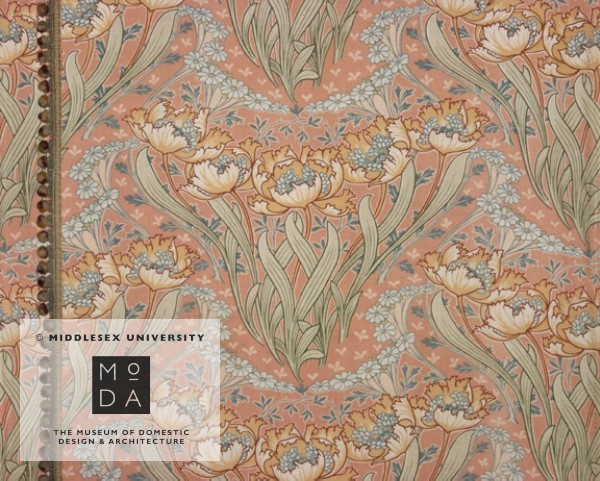 Thousands of yards of this cloth were undoubtedly sold to homes around the country and even the world. The piece we have was used as a ‘portiere’ or door curtain, possibly used to divide the front and back sections of a drawing room. It is double sided (so it could be viewed from either side of the door opening), and edged with decorative bobble fringing. We were recently delighted to find that another example of this fabric exists in the FIDM Museum, Los Angeles.

Thanks to Zoë Hendon and MoDA for their help with this post! MoDA just relaunched their website, which now includes images from their collection and Japantastic, an online exhibition about the relationship between Silver Studio and Japanese design traditions.

One response to “Investigating a Silver Studio textile”